HADRIAN'S VILLA BOTTLING OLIVE OIL
FROM ITS OWN ANCIENT GROVES 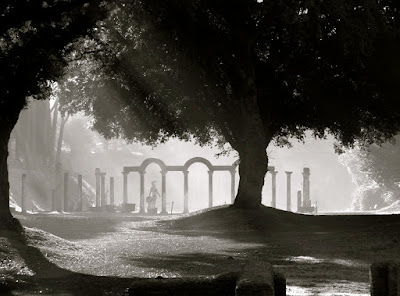 HADRIAN's Villa, the retreat of Roman Emperor Hadrian, has begun selling limited bottles of "Hadrian’s olive oil" made with olives harvested from the ancient olive trees around the UNESCO heritage monument.

In a nod the prosperous lifestyle of the Roman emperor in his 100 acre park in the spa town of Tivoli, 20 miles east of Rome, the site's curator has restarted production of oil from the 3,500 olive trees in the park, none of which are younger than 200 years old.

Only 78 large bottles of the precious Mediterranean condiment ground from the harvest in November are going on sale initially at the Villa’s bookshop after Andrea Bruciati, a respected historian, initiated the move. 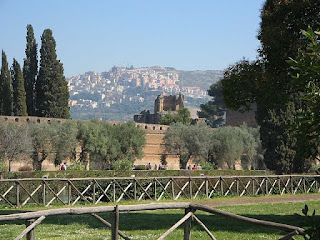 Dr Bruciati sees the batch of oil as a harbinger of a larger revival of Hadrian's rustic empire and is marketing produce also from the adjoining park at the Renaissance Villa d'Este, built by Cardinal Ippolito II d'Este, where the curator plans to grow the traditional pizzutella oblong grape that local Italian farmers have abandoned for more lucrative wine production.

"I have always thought of the Villa Adriana and the Villa d'Este as not just marvellous artistic and landscape heritage but also as places for an overall training of the individual person committed to a visit for a kind of aware tourism based on slowness, far from the world of dine and dash," Dr Bruciati told the Corriere della Sera newspaper.

"Safeguarding the artistic and cultural heritage means not just protecting the landscape but also the pastoral agriculture that in some way is its soul. Supporting the local oil with a gesture like ours means adhering to the spirit of the place ... the olive groves can't be a mere background to the Villa because they are an integral part of its perception, in the collective image of millions of people."

As many as 600,000 tourists visited the two villas this year, many of them inspired by the classic novel "The Memoirs of Hadrian" by Belgian-born French author MARGUERITE YOURCENAR, who is a saint of Antinous. 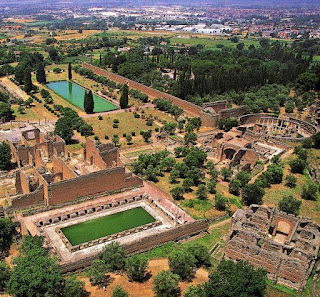 The reign of Hadrian, a refined intellectual considered a humanist by historians, from 117 to 138 AD is considered to have been among the most abundant and perhaps the happiest of the Roman empire.

The emperor was best known for building Hadrian's wall to protect the north of Britannia and for the Pantheon.

And of course he deified his lover Antinous!

"By cultivating Hadrian's Oil and grapes we are pointing the way to a sustainable future, building a bond with the local people and sending an overall positive message from our heritage," Dr Bruciati says.

"We have re-opened many areas that previously were inaccessible and lengthened the opening hours and days for visits."

"We are committed to parallel renovation of two places that only seem far apart in time but that in reality have in common the connection to Tivoli and their common destiny through centuries as magnificent domains."

Posted by Hernestus at 1:14 PM