HOW'S THIS FOR VINTAGE WINE?
1,900-YEAR-OLD CRETAN WINE IN POMPEII 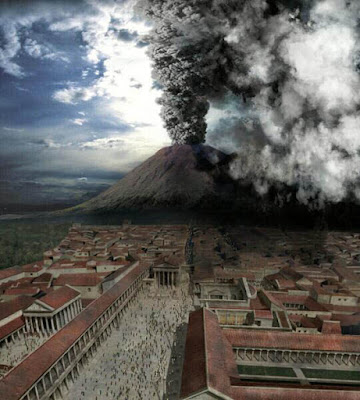 TALK about vintage wine … archaeologists at Pompeii today revealed 15 amphorae of the finest wine in the ancient Mediterranean world which had been stored in a wine cellar at the doomed city's gladiators school the day Vesuvius erupted.

The amphorae of Cretan wine were stacked lovingly in the wine cellar of the Schola Armaturarum (gladiators school) and still mostly intact.

They are the first major archaeological finds to be announced in 20 years at the site. 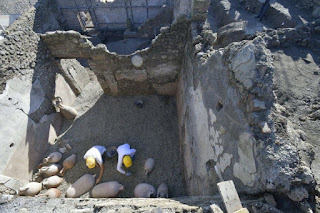 Ironically, the discovery of the amphorae is due to the fact that part of the Schola Armaturarum collapsed on 6 November 2010 due to neglect. In response to the collapse, a major project was begun to restore the gladiators school and search for more artifacts.

The amphorae contained the finest wine from Crete, says Massimo Osanna, the director of the Archaeological Park of Pompeii. 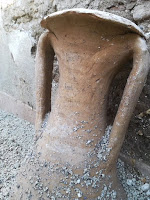 He and archaeologists Arianna Spinosa and Alberta Mastellone recognized among the vases discovered precisely those produced in Crete and noted that Cretan wine was regarded as the finest in the ancient Mediterranean.

Who could afford such quality wine? And was the wine intended for gladiators or the owner of the gladiator school?

The type of amphorae unearthed, in addition to wine, were used for the transport of oil and a fish sauce produced in Spain, different from garum that was also produced in Pompeii.

Posted by Hernestus at 8:23 PM