EGYPTIAN 'GOLDILOCKS' SAND FORMULA:
NOT TOO DRY ... NOT TOO WET ... JUST MOIST

WORKERS building the colossal monuments of Ancient Egypt had a "Goldilocks" sand formula for moving objects ... using sand that was not too dry ... and not too wet ... but that was just moist enough to make it easier to haul giant sledges.

That is the conclusion of an international team of physicists that studied the relationship between friction and water content in a number of different types of sand.

The research suggests that the type of sand found in the Egyptian desert becomes particularly slippery when slightly moist – something that might have made it much easier to move the huge stones that were used to build the pyramids.

However, the researchers found that only a small amount of water worked. If the sand were too dry … or too wet … friction increased.

Above 5% water content, friction increased as more water was added. In some cases, friction on sand with 10% water content actually surpassed the value measured for dry sand. 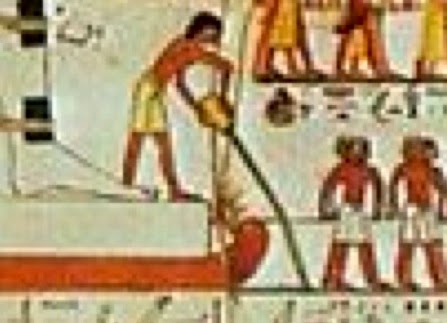 Wagner told the online journal physicsworld.com that the reason for this increase was not clear because the researchers did not see heaps of wet sand piling up in front of the sledge.

Instead, he speculates that wetter sand is softer than the concrete-like sand and so the sledge sinks into it. "Maybe it is a bit like the difference between sliding on concrete and sliding on rubber," says Wagner. "In any case, this is something we have to investigate in future studies."

The study was done by Christian Wagner and colleagues at Saarland University in Germany, along with researchers in the Netherlands, Iran and France.

The team was inspired by an ancient Egyptian wall painting showing a huge statue being hauled across the sand on a sledge in about 1800 BC.

The painting has a detail that has long puzzled Egyptologists: a worker who appears to be pouring water onto the sand in front of the sledge while others appear to be carrying water to replenish his supply.