ANTONIUS SUBIA ON THE DISCOVERY
OF THE STAR OF ANTINOUS 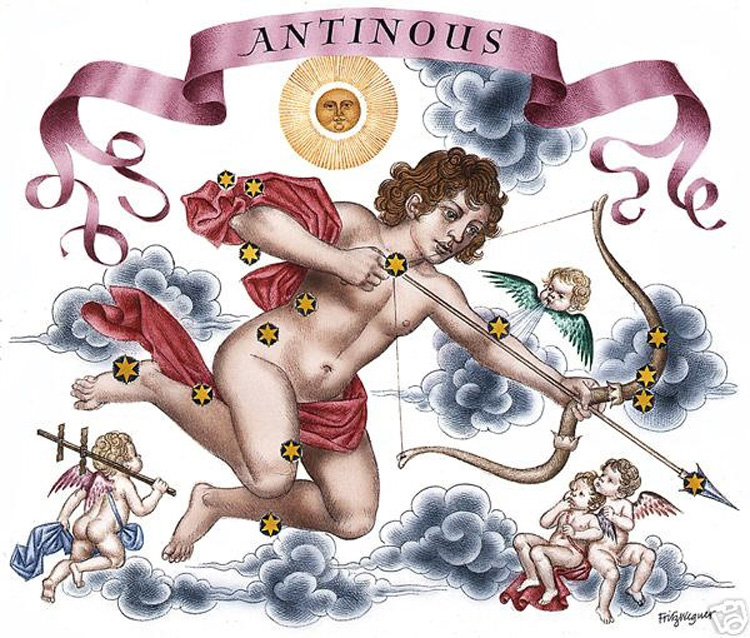 MAY the Light of the New Star of Antinous shine into all our hearts and illuminate our souls!

We are still trying to figure out exactly what took place in the sky and when, and why it was so important that it confirmed the deification of Antinous, whether it was a comet or a new star, a Nova in what is now the constellation of Aquila.  I lean towards the Nova possibility, because of the use of term "new star" by Dio Cassius, with no reference to a comet, or "long-haired" star...and also because some of the most dramatic known Novas have been located in the constellation Aquila, such as the Nova Aql of 1918

Two major novae have been observed in Aquila: the first one was in 389 BC and was recorded as being as bright as Venus; the other (Nova Aquilae 1918) briefly shone brighter than Altair, the brightest star in Aquila.

So it is possible that there was a Nova in the year 131...and by the way, our previous estimate of year 132 is most likely wrong...the year 131 would have been only a few months after Antinous died...and if this is so, then the appearance of the new star would have occurred about six months before the miraculous inundation of the Nile the following summer.  I've always wondered about the timing issue, whether or not the constellation Aquila was actually visible in the sky at the time of year...but it seems that it is, for about one hour before sunrise.  This is called a Heliacal rising, when the first appears above the horizon just before sunrise, and then on each succeeding night seems to rise higher and higher every night thereafter.  This is what they mean by the Rise of the Dog Star, which signaled the beginning of the Egyptian calendar and which signaled the annual flooding of the Nile.  The star Sirius and Altair (which is the brightest star in the constellation Aquila, the star traditionally located right above Antinous's head) are on almost exactly opposite of the night sky...yet strangely enough, they are the two brightest stars in relatively close proximity to our Sun, part of the local group.

As an argument for the comet:  It was the Chinese who recorded what is said to have been a comet on January 29th 131.  It is known that from the point of vie of China the tail of a comet might be visible, but in Europe, the the tail might be hidden...not sure if I understand why, but this is what I've read, so it may be that from Hadrian's point of view, for the brief hour or so before sunrise, all they saw was a single point of new light in the sky.  I'm still not sure what I think about this...and also...I keep thinking that I recall reading in Beloved and God a brief mention by Royston Lambert that there had been a comet in the sky in the year 130 which had given rise to foreboding prophesies...but I keep trying to find this reference and come up with nothing...if any of you can take another look at Beloved and God and find this reference, I would be much ingratiated.  And then there is the reference that in the year before Antinous died, that a Phoenix had been seen in Egypt, perhaps another allusion to a comet.  If a comet did in fact occur in the months before Antinous died then it would indeed perhaps confirm the Chinese reports, though the dates would disagree but the ancients were terrible about recording dates so there is ever possibility that some confusion might have taken place.  A comet before his death and a new star (nova) afterward would however be a significant narrative of spiritual significance.

The Star of Antinous was the proof that Antinous had indeed arisen to the heavenly sphere...that he had taken his place among the immortal gods...more than anything else..it was what all the disbelievers would have required to recognize that Antinous was more than just Hadrian's little pretty boy.  It would have needed to be a very significant new star in order to make an impact upon the general populace...it would have needed to be an obvious sign in the sky that even an untrained astrologer could look up and seen for themselves..it would have needed to be as bright as Altair...there were a great many people all over the empire who were familiar with the stars...sailors and temple soothsayers...all of whom would have had enough familiarity with the constellations to know if a new star had actually appeared in the night sky for the first time.  If there really had appeared a new star for the first time, as Dio Cassius skeptically reports, then the "experts" would have noticed it, and would have confirmed the official reports from Hadrian's court that Antinous had arisen to godliness...and the word of their confirmation would have spread, dispelling whatever  doubts the general, uninformed populace might have felt when the Edict of Deification was announced.

The Star of Antinous was the most significant event in the formation of our religion...this is what separates Antinous from other gay demi-gods such as Achilles and Hephestion...they were deified in the same way and for similar reasons as Antinous, but their cults never assumed world-wide importance or longevity...they never crossed the line from heroism to godliness...for one basic reason...because there was no cosmic confirmation to solidify their deification.  I just read a Spanish book about Antinous by De La Maza written in 1969 which emphatically states that the New Star of Antinous was the most important event that elevated Antinous to the immortal state that we recognize him to hold to this day.