FIGHTING DEMONS AND DISASTERS
WITH MAGICAL EGGS IN ASIA MINOR 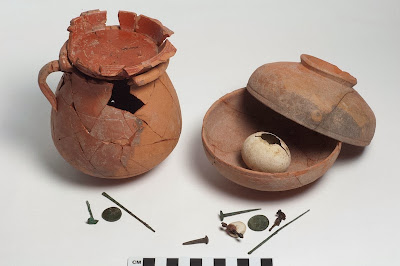 HADRIAN was fascinated by magic and exotic customs, so he would have been intrigued by the way that people in Asia Minor, the homeland of Antinous, protected their homes from earthquakes.

They put magical amulets under the foundations of their homes … often burying magical eggs.

Residents of Sardis, an ancient city in modern-day Turkey, spent decades rebuilding after a devastating earthquake struck one night in the year AD 17.

To ward off demons and future disasters, some locals sealed eggs under their new floors as lucky charms, archaeologists found.

In the summer of 2013 archaeologists were excavating an ancient building at Sardis that was constructed after the earthquake.

Underneath the floor, they found two curious containers that each held small bronze tools, an egg and a coin, resting just atop the remains of an earlier elite building that was destroyed during the disaster.

The objects in the odd assemblages were important in ancient rituals to keep evil forces at bay, and the archaeologists who found them believe they could be rare examples of how the earthquake affected ancient people on a personal level.

Why eggs? As any structural engineer can tell you, a chicken's egg is incredibly strong. Despite the fact that the shell is fragile, the ovoid shape provides structural strength thousands of times its natural properties.

Thus the residents were calling on the magic of the egg amulet to enhance the structural integrity of their fragile domiciles.