AND THE DELPHINEA OF ANTINOUS 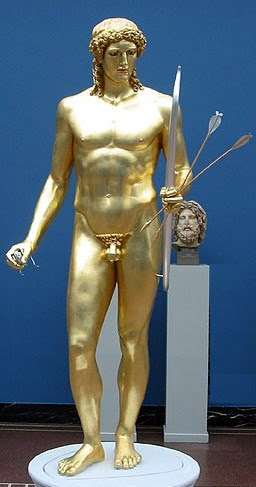 The glorious image above left shows a modern reproduction of the Apollon Parnopios which has been gilded and fitted with gemstone eyes to show how it might have looked in a temple where a ray of sunlight would have set it ablaze in gleaming light.

Flamen Antinoalis Antonyus Subia explains the significance for us Antinoians: 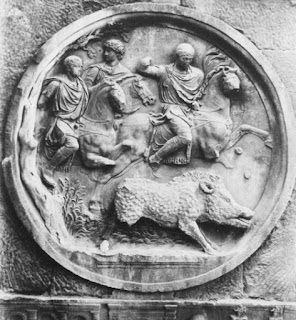 Also in the Solstice, we commemorate the Sacred Boar Hunt. In our Liturgical Calendar, this is the day when Hadrian and Antinous arrive at the sacred city of Bithynium/Claudiopolis, the home of Antinous, in the year 129 AD.

The region is teeming with bountiful wildlife and so Hadrian and Antinous went on hunting forays while in Bithynium.

The Boar Hunt had deeply mystical symbolic meaning for Hadrian, as exemplified that it was elevated to mythic proportions for use in public monuments.

The image shows Hadrian and Antinous (looking backwards) during the Sacred Boar Hunt, immortalized on the Arch of Constantine in Rome.


"This hunt takes place in the ancestral forests of Antinous, in Phrygia, and its meaning is closely connected to the Mysteries of Adonis, and Freyr. It represents the full vigor of his strength, courage and skill as a hunter.

"This festival is a commemoration of the joy of life, in celebration of indulgence and sensual fulfillment.

"The Sacred Boar Hunt represents the pinnacle of the life of Antinous."