HADES ORIGINALLY WAS THE HOME 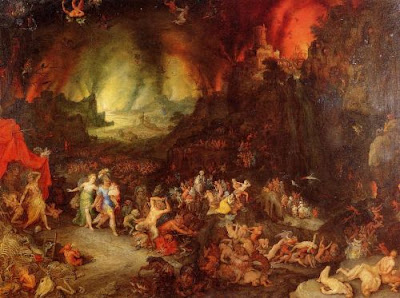 HADES was once the site of a cave-dweller village which housed hundreds of people, according to new evidence unearthed by archaeo-spelunkers.

The enormous cavern in southern Greece is believed to have been the legendary entrance to Hades in myth and legend for the Ancient Greeks.

Now experts say the cave once housed hundreds of people, potentially making it one of the oldest and most important prehistoric villages in Europe — before it collapsed and killed everyone inside, researchers told LIVESCIENCE.

The complex settlement seen in this cave suggests, along with other sites from about the same time, that early prehistoric Europe may have been more complex than previously thought.

Ironically, the giant cave could have resembled something vaguely similar to the scene depicted by Jan the Elder Bruegel of Aeneas and the Sybil entering Hades (above left).

The cave, located in southern Greece and discovered in 1958, is called Alepotrypa, which means "foxhole."

"The legend is that in a village nearby, a guy was hunting for foxes with his dog, and the dog went into the hole and the man went after the dog and discovered the cave," said researcher Michael Galaty, an archaeologist at Millsaps College in Jackson, Mississippi.

"The story's probably apocryphal — depending on who you ask in the village, they all claim it was their grandfather who found the cave." [ See Photos of Alepotrypa Cave ]

After its discovery, Greek officials originally saw the cave as a potential tourist attraction. However, when archaeologists realized the historical secrets it might hold, they led efforts to keep tourism from inadvertently destroying the site.

Excavations that have taken place at Alepotrypa since 1970 uncovered tools, pottery, obsidian and even silver and copper artifacts that date back to the Neolithic or New Stone Age, which in Greece began about 9,000 years ago.

"Alepotrypa existed right before the Bronze Age in Mycenaean Greece, so we're kind of seeing the beginnings of things that produced the age of heroes in Greece," Galaty said.

Cave dwellers apparently used the cavern not only as a shelter, but also as a cemetery and place of ritual.

"You have to imagine the place torchlit, filled with people lighting bonfires and burying the dead," Galaty said. "It was quite like a prehistoric cathedral, a pilgrimage site that attracted people from all over the region and perhaps from further afield."

The cave apparently went through a series of occupations and abandonments.

"Alepotrypa was at a perfect place to intercept sea trade from Africa all the way to the eastern Mediterranean, being right at the southern tip of Greece," Galaty said.

Settlement at the cave abruptly ended when its entrance collapsed about 5,000 years ago, perhaps due to an earthquake, burying cave dwellers alive.

"The burial sites and rituals that took place really do give the cave an underworld feel. It's like Hades, complete with its own River Styx," Galaty added, referring to the river that in Greek myth served as the boundary between the mortal realm and the netherworld.