EGYPTIANS SOLD THEMSELVES TO TEMPLES

RATHER THAN LIVE ON THE STREETS 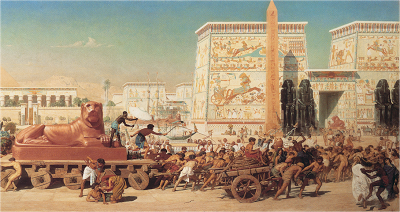 ILLEGITIMATE Egyptians sometimes sold themselves into slavery at temples rather than live on the streets and be forced into manual labor or military service, according to new findings.

And they even paid a monthly fee for the "privilege," according to Egyptologist Kim Ryholt from the University of Copenhagen, the first researcher who has studied this puzzling phenomenon.

"I am your servant from this day onwards, and I shall pay 2½ copper-pieces every month as my slave-fee before Soknebtunis, the great god."

This is a translation of a formulaic pledge found in 100 papyrus slave contracts signed 2,200 years ago at the temple city of Tebtunis.

University of Copenhagen Egyptologist Kim Ryholt is the first researcher to have analysed these collectively in his recent article "A Self-Dedication Addressed to Anubis - Divine Protection against Malevolent Forces or Forced Labour?" from the forthcoming publication Lotus and Laurel - Studies on Egyptian Language and Religion.

Today, it is difficult to comprehend why anybody would voluntarily join the ranks of the temple slaves and even pay the temple a monthly fee. But if you, like Kim Ryholt, can read the contracts, which were written in the ancient Egyptian language Demotic, a plausible explanation surfaces:

"Ninety per cent of the people who entered into these slave contracts were unable to name their fathers, although this was normally required. They were presumably children of prostitutes. This is a clear indication that they belonged to the lower classes which the king could subject to forced labour, for example digging canals, if he so desired. However, we know from other contemporary records that temple slaves were exempt from forced labour," says Kim Ryholt.

"Many therefore chose to live as temple slaves because it was the only way of avoiding the harsh and possibly even deadly alternative; the temple was simply the lesser of two evils for these people. And for the temples, this was a lucrative practice that gave them extra resources and money."

According to Kim Ryholt, the possibility of avoiding forced labour by entering into slave contracts with temples was limited to a 60-year-period – from roughly 190 BC to 130 BC. There is no indication that the practice existed in any other period in ancient Egypt; probably because the royal family could not, in the long run, afford to yield that many resources to the temples.

A contract comprised of
fragments from Papyrus
Carlsberg and British Museum.

The papyrus slave contracts were found in a rubbish dump next to the Tebtunis temple in illicit excavations and were subsequently scattered across Egypt, Europe and the United States. So it has taken Kim Ryholt years to collect and analyse the contracts.

"The Papyrus Carlsberg Collection at the University of Copenhagen contains a large number of contracts, but many are fragmentary, and in order to study the whole material I have had to visit many other collections where there would be a chance to find Tebtunis contracts, including the British Museum, university collections in New Haven, Michigan and Florence, and not least Tebtunis itself where I participate in the modern excavations.

"In some cases, a contract might be physically divided between, for instance, Copenhagen and the British Museum, and the fragments are then scanned and put together virtually on the computer," Kim Ryholt says.
Posted by Hernestus at 9:00 AM