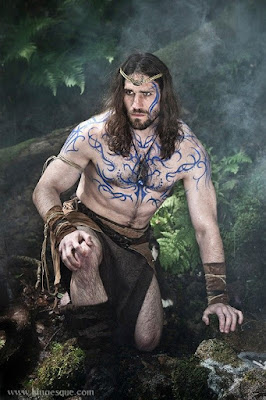 ONE of the more obscure Innocent Gay Martyr Saints of Antinous is Louvernios of Lindow ... a 2,000-year-old bog mummy in England who was a homosexual Druid who most likely offered himself as a human sacrifice against invading Romans to keep them (successfully) out of Ireland.

Also called the Lovernios the Lindow Bog Man, his mummified body was found in 1984.

That was when a peat cutter in Lindow Moss, on the Mersey River of western England, found the well-preserved body of a man, believed by some scholars to be the sacrificed body of a Celtic Druid from Ireland who had probably come to England to be ritually prepared and sacrificed on May Day, 60 AD to keep the advancing Roman army away from Ireland.

Indeed, the Roman legions stopped just five miles short of Lindow Moss, and never invaded Ireland. The exact date ... 1 May 60 AD ... was ascertained by contents of his stomach which included "scorched bread" of the sort used in Druidic Beltane or May Day festivities.

And historian CONNELL O'DONOVAN presents compelling evidence to prove that this Druid was also a homosexual. the Lindow Bog Man had suffered a quadruple execution of garroting, bludgeoning, slit throat, and drowning in the bog, naked except for an armband of arctic fox fur on his left arm. 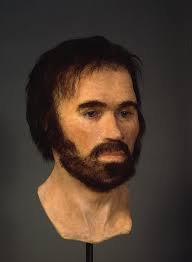 Some Celtic historians interpret the fox arm band as meaning "My name is Fox" or Louvernios, an attested ancient Celtic name meaning fox.

However, others suggest the fox armband of Lindow Man (reconstructed face left) signifies not 'My name is Fox', but 'I am a sacrifice', and in particular, a communal scapegoat.

The fox is regarded in many societies, including the Celtic, as an outlaw animal.

The fox lives on the periphery of human society, neither domesticated nor fully wild.

On one hand it is despised by farmers for its depredations on their livestock...while on the other hand it is grudgingly admired for its wiliness ... hence its role as a Trickster figure, such as Reynard the Fox.

O'Donnell says: "This peripheral and outlaw existence of the fox in the Celtic imagination fits nicely with the probability of Lindow Man's cultic-based homosexuality."

Scholars tend to agree that Tollund Man’s killing was some kind of ritual sacrifice to the gods ... perhaps a fertility offering. To the people who put him there, a bog was a special place. While most of Northern Europe lay under a thick canopy of forest, bogs did not. Half earth, half water and open to the heavens, they were borderlands to the beyond.

To these people, will-o’-the-wisps ... flickering ghostly lights that recede when approached ... weren't the effects of swamp gas caused by rotting vegetation. They were fairies. The thinking goes that Lindow Man's tomb may have been meant to ensure a kind of soggy immortality for the sacrificial object. 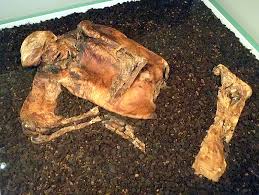 Louvernios is the best-looking and best-known member of an elite club of preserved cadavers that have come to be known as "bog bodies."

These are men and women (also some adolescents and a few children) who were laid down long ago in the raised peat bogs of Northern Europe ... mostly Denmark, Germany, England, Ireland and the Netherlands.

They can keep speaking to us from beyond the grave because of the environment’s singular chemistry. A body placed here decomposes extremely slowly. Soon after burial, the acid starts tanning the body’s skin, hair and nails.

As the sphagnum moss dies, it releases a carbohydrate polymer called sphagnan. It binds nitrogen, halting growth of bacteria and further mummifying the corpse. But sphagnan also extracts calcium, leached out of the body’s bones.

This helps to explain why, after a thousand or so years of this treatment, a corpse ends up looking like a squished rubber doll.

Nobody can say for sure whether the people who buried the body in the bog knew that the sphagnum moss would keep him intact. It appears highly unlikely ... how would they? Still, it is tempting to think so, since it fits so perfectly the ritualistic function of Louvernios, perhaps regarded as an emissary to the afterworld.