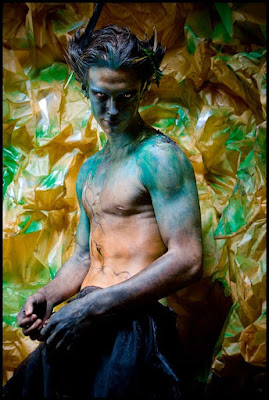 THE early Christians "demonized" Antinous and all other deities. In essence, we are all demon worshipers in the eyes of fundamentalist Christians.

In a perverse reversal of polarities, fanatical seekers of righteousness often become the very force of darkness and evil that they profess to fight. By identifying too strongly with one pole ("Good", "Righteousness") they call into being its opposite pole. They conjure up a "demon."

We call these demonized individuals "Anti-Saints" ... people who, through no fault of their own, are demonized by self-righteous fanatics because they are outsiders.

The Religion of Antinous has one special "Anti-Saint" ... JAKOB "ZAUBERJACKL" KOLLER, the shape-shifting gay sorcerer of Salzburg.

In one of the most horrific witch hunts of the 17th Century, 139 youths and pre-adolescent boys were put to death as werewolves and witches ... at the hands of religious fanatics determined to rid Salzburg of demons.

Orphans were common in the aftermath of the 30 Years War, and their begging and thievery became a nuisance to upstanding people of Salzburg, who "demonized" them as the apprentices of evil sorcerers ....

Zauberjackl (Magic Jake) was a 20-year-old man with red hair in the Salzburg area of Austria in the late 17th Century who "fancied the lads" and who had a reputation for hanging out with adolescents and teaching them the black arts.

Growing up in the chaos after the war, he lived on the streets under a cloud of suspicion after his mother (under torture for stealing) told investigators he was a sorcerer skilled in the black arts. But she claimed he was dead ... the authorities heaved a sigh of relief. 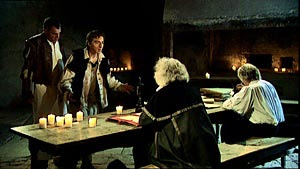 Whether out of spite or fear or for whatever reason, little Dionysus claimed that the "Zauberer Jackl" (Sorcerer Jake) was very much alive. (Interrogation scene re-enacted in an Austrian TV documentary film about Zauberjackl.)

Dionysus said he had spent the previous three weeks in the company of Zauberjackl, who he claimed was engaged in very active instruction of scores of boys and young men in the arts of black magic.

He said Zauberjackl could conjure up an infestation of mice, rats and other vermin to wipe out the crops and grain storage warehouses of anybody who crossed him.

News of Dionysus's testimony swept Salzburg like wildfire, creating a frenzy of hysteria in a town that was just beginning to recover from the ravages of the 30 Years War.

Authorities began rounding up every homeless boy and young man for interrogation -- there were a lot of homeless war orphan refugees. 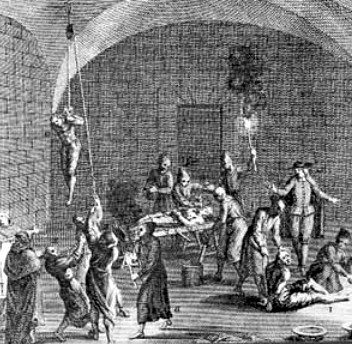 Any adolescent street waif or roustabout lad was immediately suspected of membership in the Zauberjackl gang.

The illustration shows boys and young men being interrogated for witchcraft in Salzburg.

In particular, those who were physically or mentally disabled were thought to be in league with "demons" -- whose mark they bore on their bodies, if not on their souls.

Under torture, and given leading questions, sobbing boys gave their interrogators the most hair-raising stories of Zauberjackl' s occult exploits.

In all, over the next 15 years, 139 young people were rounded up and executed. Of that total, 113 were males. All but 21 were under age 21. And 39 of them were under the age of 10. One-third were classified as "infirm of mind or body". Most were garrotted and their bodies burned.

The youngest, in a show of mercy, were given a quick death: Rather than slowly strangling to death, they were beheaded and then their bodies were burned.

Zauberjackl himself was never apprehended. There were in fact no reported sightings of him. Ever. People from his village insisted he had died of natural causes years earlier, but the authorities assumed they were under his magical spell.

The fact that nobody had ever seen him only added to the phantom mystique surrounding Zauberjackl. 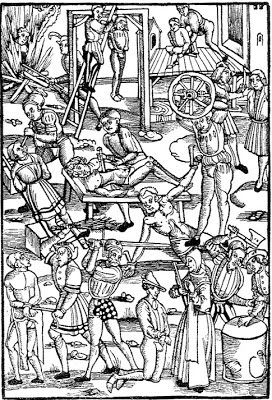 Those high-minded officials in Salzburg evoked the gay werewolf/wizard demon named Zauberjackl. And in doing so, he got out of their control and took on a life of his own.

This woodcut shows popular methods of executing witches in Salzburg.

It's unimportant whether a 20-year-old, red-haired guy named Jakob Koller was ever actually a shape-shifting gay wizard who inculcated bad boys with the secrets of the black arts.

The sad fact is that great evil was carried out and that scores of young lives were lost. The terrible irony is that this evil was done in the name of righteousness and in pursuit of a demonic force.

A demon did indeed stalk the streets of Salzburg in the last quarter of the 17th Century ... it murdered 139 homeless street boys.

Similarly, various horrific demons are still on the loose today, all of them inadvertently evoked by self-righteous people who are grimly convinced they are carrying out the will of Allah or Jesus.