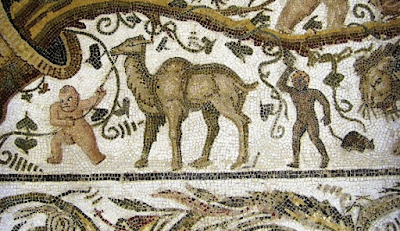 DID Antinous ride a camel … in Roman Britain?

In a new blog post by Dr. Caitlin Green, the historian explores the prevalence of camels across the Roman Empire, based on a number of camel remains excavated in areas such as Spain, Italy, France, Germany, Austria, Hungary, Slovenia and the Balkans ... and possibly even in Britannia.

As she notes, the remains are dated to between the 1st and 5th centuries CE, with many coming from the third century or later.

Also, Dr. Green remarks on the variant use of different types of camels across the empire:

"Recent surveys by both Pigière & Henrotay and Tomczyk indicate that, where identification is possible, the evidence points to dromedaries or Arabian camels being dominant in the western half of Roman Europe whilst Bactrian camels were mainly found in the east, although the split was not absolute … for example, a near-complete skeleton of a Bactrian camel is known from a Roman urban context at Saintes, France, and dromedary remains have been recovered from Kompolt-Kistér, Hungary."

Archaeological evidence indicates that camels were used across the Roman empire well into the early medieval period. 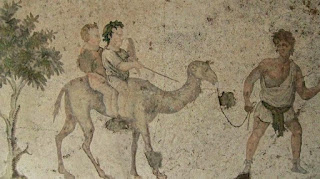 As historian Caitlin Green suggests, this includes the island province of Britannia.

In Roman antiquity, the camelus (from the Greek word κάμηλος) could come with one hump or two.

The single humped camel is commonly called a dromedary. The dromedary was usually from the Arabian Peninsula and the African steppe regions.

The two-humped camel was the Bactrian camel (Camelus bactrianus), which generally hailed from the colder desert regions of Asia.

There is strong evidence to support the hybridization of these two types as early as the 1st millennium BC, which produced a sturdier one-humped animal that could carry about 100 kg more per day.

From the Hellenistic to the Roman period, dromedaries were used to carry not only freight, but also mail along roads often protected by a police force.

This was a camel mail service model inspired by the earlier Persian Empire. A number of overland trade routes stemming from the Red Sea ports used these pack animals to transport freight to the East, in order to connect to the Nile.

Yet bone evidence for camels within the empire has now expanded our view of these animals to include an area far beyond just the Red Sea region.