BAY IN SOUTHEAST ENGLAND
WAS WHERE JULIUS CAESAR LANDED

ARCHAEOLOGISTS say they have finally discovered the landing site of Julius Caesar's 55BC invasion of Britain … at the far southeast tip of England.

Until now, mystery has surrounded the Roman army's first encounter with ancient Britons, but researchers now believe the fleet landed on the Isle of Thanet, Kent.

A team from the University of Leicester have pinpointed a previously overlooked site near Pegwell Bay, as the place the Roman army first landed. 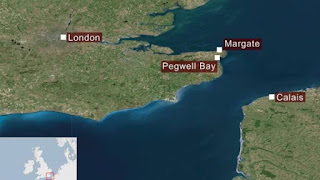 They have uncovered a large ditch in the neighbouring hamlet of Ebbsfleet.

Judging by its size and date, it appears to have been a Roman base from the 1st Century BC.

The trench's shape is also reportedly very similar to Roman defences in France, and contained iron weapons, including a Roman javelin, suggesting it was used by the invading army. 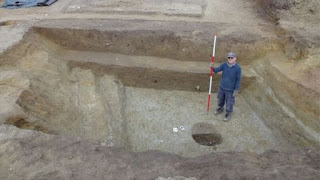 With the site now half-a-mile inland, searches had previously focused on the Kent shoreline ten miles to the south.

However at the time of Caesar's first attempted landing in 55 BC, the bay would have far closer to the coast.

The location also matches the one described by Caesar, which he said was visible from the sea, with a large open bay, and was overlooked by higher ground.

If correct, the group may have discovered the first concrete evidence of a camp established by the Roman army which had never previously been found.