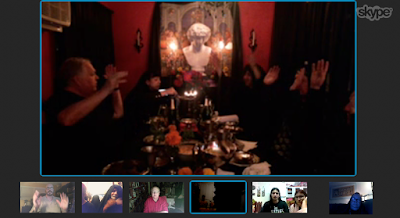 "THE most salient feature about Antinous, and the thing that makes our religion different from others, is that Antinous was a mortal human being who actually lived," said Antonius Subia in a global Skype link-up this weekend celebrating the birthday of Antinous.

Speaking from the Hollywood Temple of Antinous to celebrants taking part from across the United States, Europe and as far away as Brazil, he noted that we know his birth date ... 27 November ... and we know what he looked like from countless statues.

Joining ceremonies from Germany via Skype, Priest Hernestus offered a reading from MARTIN CAMPBELL's brilliant historical novel about the life of Antinous entitled, THE LOVE GOD, which has received critical acclaim.

The passage described the mountainous woodlands of Bithynia (modern Turkey) where Antinous was born in the year 111 AD.

More big news was made at the virtual-reality conclave was held in conjunction with ceremonies at the HOLLYWOOD TEMPLE OF ANTINOUS when Antonius announced the 4th Sacred Games of Antinous in the modern era will be held August 21st, 2018. Applications for entries are being taken now.

"Everyone has heard of the Ancient Olympics, but there were other Games held in antiquity," Antonius told the celebrants gathered at the Hollywood Temple and via phone and Skype.


But the Antinous Games were unique in that they also included competition in the arts and music.

This is the IV ANTINOEIAD of the modern era, and entry is open to everyone wishing to honor Antinous with their own artistic, academic or athletic talents.