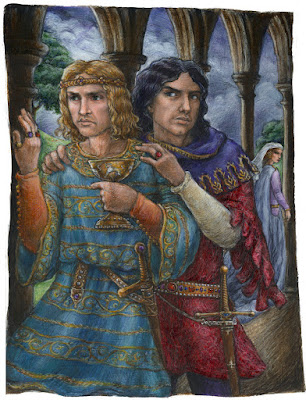 ON 21st September I and the companions of Antinous venerate one of my heroes (flawed though he was), King Edward II of England. His story is fascinating, scandalous and, ultimately, tragic.

His story is also one of the earliest recorded examples of homophobic abuse and murder in British history.

Contemporary accounts say Prince Edward was handsome, athletic and had acquired a reputation for extravagance.

His father, Edward I was powerful and successful in battles. Before his father's death, Prince Edward II had angered his father by his "excessive affection" for a young men, especially one called Piers Gaveston. Piers was a nobleman from Gascon - an area of South West France. Piers was Edward II's favourite lover from a group of 12 handsome young men he is recorded as always having around him.

In July 1307 King Edward I died and and was succeeded by King Edward II - he was 23. The image below is the only surviving contemporary depiction of Edward II, showing his coronation.

On 25 January 1308 Edward married Isabella (who was aged between twelve and sixteen at the time) the daughter of Philip IV of France. It was a marriage of convenience to consolidate power across the Norman empire. With her he needed to sire a future King, so they had several children including a son who later became King Edward III. 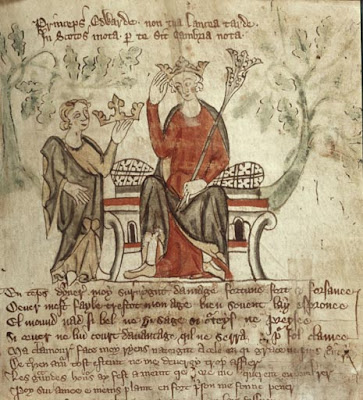 King Edward II was dependent on the support of the powerful English barons. However, they believed that a king had a duty to distribute patronage fairly amongst the aristocracy - not abdicate his responsibilities by showering it all on one non-aristocratic favorite. At the parliament held in April 1308 the barons demanded hat Gaveston be banished.

Edward II reluctantly agreed and sent Gaveston to Ireland as his Lieutenant there (June 1308). However, he immediately began to scheme for Gaveston's return - implementing a policy of "divide and rule", buying off some of the barons with favours. Finally the "Statute of Stamford" was signed to redress baronial grievances in exchange for Gaveston's return.

Quickly the affair with Piers began to offend the barons again. Gaveston clearly had a stinging sense of humour. He began openly inventing scandalous names for each baron. We know that "Black Dog" was applied to the Earl of Warwick, and "Bursting Belly" for the Earl of Lincoln!!

Unfortunately Edward began to lose the ground his father had won. He lost battles with Robert the Bruce thus effectively losing Scotland. The barons mutinied and, again, tried to banish Gaveston. They placed themselves in effective control of the country. Edward II refused to accept his overthrow and Gaveston's exile, so civil war erupted. Edward II placed Gaveston in Scarborough Castle under the protection of two Earls from of his trusted band of 12 men. The castle was besieged and the Earls were forced to surrender the castle and Gaveston. He was thrown in a dungeon, and then beheaded  on 19 June 1312. 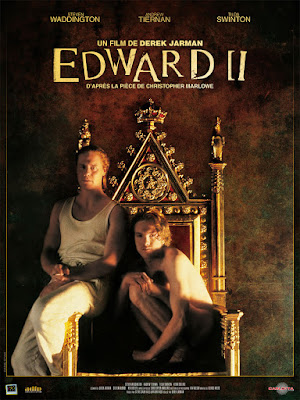 In deep grief Edward lost the plot. In the vacuum that followed Robert the Bruce won a famous victory at Bannockburn thus securing Scotland as a separate kingdom for centuries ahead.

Also Queen Isabella began an adulterous affair with one of the Earls, Roger Mortimer. Isabella and Mortimer formed an army which overthrew Edward in 1326.

He was imprisoned in a damp pit at Berkeley Castle. Two of his beloved 12 supporters made two attempts to free him but failed.

What happened next is not 100% clear but contemporary accounts show that Isabella and Mortimer announced that Edward was dead in September 1327.

Many rumours circulated about the cause of death but the account recognised by most historians is that one man held Edward down while another pushed a red hot shaft of iron into his rectum. The screams where reputed to have been heard well beyond the castle walls.

In 1594 Christopher Marlowe published his play The Troublesome Reign and Lamentable Death of Edward the Second, King of England. Marlowe was gay and reputed by many to have been the secret lover of William Shakespeare - maybe even the true author of Shakespeare's plays. Edward II the play is never taught in schools and remained pretty much ignored until Derek Jarman's wonderful film of the play in 1991.

When I was learning British history at school the reign of Edward II was simply referred to as the 'failed rule of Edward II'.

Most gay men know of Edward II here in the UK. He is an underground cult here to many.

Many Antinous bless him.
MARTINUS