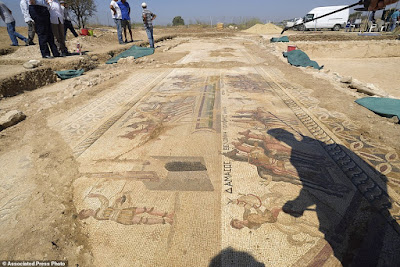 Archaeologists in Cyprus have uncovered a 10-meter (36-foot) mosaic floor depicting scenes of ancient chariot races in the Roman hippodrome.

Dating back to the 4th Century AD, this magnificent artifact was discovered in the Akaki village outside the capital Nicosia, making it the only one of its kind in Cyprus and one of seven in the world.

Not only is this mosaic incredibly detailed, but it illustrates complete race scenes for four charioteers, each being drawn by a team of four horses. 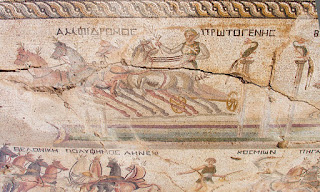 Experts believe this is a representation of the different factions that competed in ancient Rome.

"The hippodrome was very important in ancient Roman times, it was the place where the emperor appeared to his people and projected his power," said Fryni Hadjichristofi, a Cyprus Antiquities Department archaeologist.

Derived from the Greek words hippos ("horse") and dromos ("course"), the hippodrome was an open-air stadium, used for chariot and horse racing, which was a common Grecian activity during the Hellenistic, Roman and Byzantine eras.

The excavation crew is still working to uncover the entire floor, but the area that is visible measures 36 feet long and 13 feet wide. 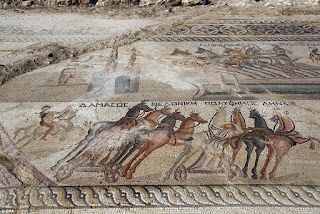 The team believes this stunning piece was once part of a villa owned by a wealthy individual or nobleman while Cyprus was under Roman rule.

The mosaic displays scenes from a chariot race, with one charioteer standing as he is being pulled by four horses ... in total it shows four different races.
Near each of the four charioteers are inscriptions, which is believed to be their names and the name of one of the horses.

Archaeologists believe this representation is the four factions that would compete in chariot races while ancient Rome reigned.

Three cones can be seen along the circular arena, each topped with egg-shaped objects, and three columns seen in the distance hold up dolphin figures with what appears like water flowing from them. 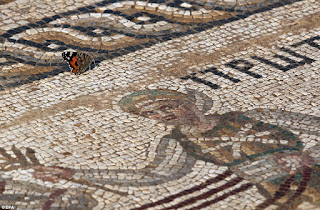 On another part of the mosaic is one man on horseback and two others that are standing - one is holding a whip and the other a jug of water.

"It is an extremely important finding, because of the technique and because of the theme," the director of the Department of Antiquities Marina Ieronymidou said during a press conference in front of the mosaic this week.

"It is unique in Cyprus since the presence of this mosaic floor in a remote inland area provides important new information on that period in Cyprus and adds to our knowledge of the use of mosaic floors on the island."

The typical hippodrome was carved into a hillside and the material pulled from the ground was packed along the edges to construct an embankment for seats.