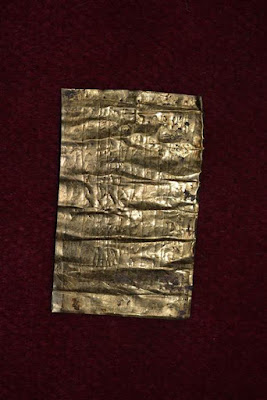 Archaeologists in Serbia have found a late Roman-era tomb which contains tiny strips of gold, silver and lead on which magical spells and perhaps even curses were inscribed … invoking deities of the underworld.

Prayers and magical spells were believed to be far more effective if incised on thin sheets of magical metal ... like this 4th Century AD magical spell pictured here ... on a wafer-thin gold foil … called "lamella".

Gold, silver, copper and lead all had magico-religious significance ... with lead usually reserved for curses!

Miomir Korac, from the Belgrade-based Archaeological Institute and leader of the excavations, said these lamellae were found at Viminacium in eastern Serbia near the Romanian border … an area where superstition is still rife, he noted.

Lead curses were very common in Ancient Greece and Rome. A virulent curse would be inscribed into a thin sheet of lead which would then be folded up, preferably with hair or nail clippings or some other personal items from the target subject.

And then the lead packet would be secreted in or near the subject's home, under the bed being the best place. 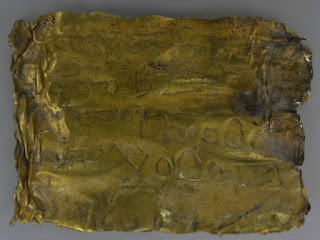 Or if that was not possible (due to distance or enmity), then the lead curse could be thrown into a well or a river or some other place as close to the underworld as possible so that the gods and demons of the underworld could carry out the magical spell.

Because of the fact that they were safely deposited at the bottom of wells or graves or pits, there are lots of surviving lead curse strips or sheets, which experts call "lamellae".

Writing a prayer or a magical spell on papyrus was good ... it could be worn in an amulet around the neck or else dissolved in a potion and drunk. But having it incised by a priest into a sheet of gold foil was even better, especially for prayers such as this invocation for Phoebus Apollo.

Lead was the metal-of-choice for virulent curses, which could be placed surreptitiously in a chink in the wall of your victim's house or in a water well, where they would never be detected ... 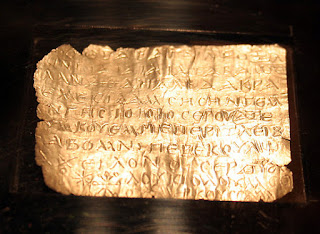 Because of the fact that they were safely deposited at the bottom of wells or graves or pits, there are lots of surviving lead curse sheets.

A particularly nasty lead curse found recently in Cyprus said: "May your penis wither and may your groin ache in agony when you try to make love."

In many cases, these lamellae were "demon redirection" talismans. They called upon evil demons to go elsewhere.

There is a famous gold lamella found in Romania which says: "Demon hanging over me in this place, go and do your hanging around at Julia Cyrilla's house. Do this for me. Now! Now!" 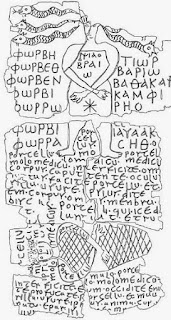 We must stress, however, that there is NO historical record of Antinous EVER having been called upon to curse anybody.

On the contrary, there is much evidence that he was called upon to bring love and health and prosperity to his followers.

The Obelisk inscription assures us that Antinous "sends healing visions" to his followers as they slumber ... having a gold lamella prayer to Antinous the Gay God under your pillow presumably didn't hurt either.