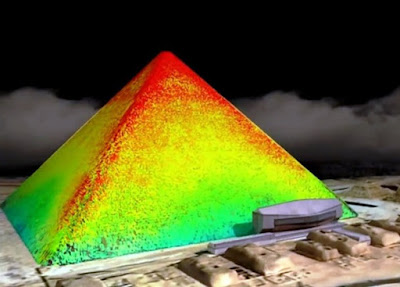 THERMAL scans of the Great Pyramid have revealed "anomalies" which could be hitherto undiscovered chambers, passageways ... or simply stone blocks of a different building material from those around them. 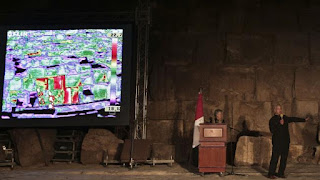 Speaking at a news conference in front of the Great Pyramid this evening (photo at left), he said the thermal scanning was made at sunrise as the sun heats the structures from the outside, and then at sunset when the pyramids are cooling down.

The speed of the heating and cooling phases was used to uncover "anomalies" such as empty areas in the pyramids.

The thermal scanning was carried out in collaboration with the Faculty of Engineering at Cairo University, the French Heritage Innovation and Preservation (HIP) Institute, the Université Laval in Quebec and the Nagoya University in Japan.

Eldamaty told reporters at the news conference, which was held Monday evening at the step of the Great Pyramid plateau, that the result of the infrared thermography scan on the first row of the pyramid’s limestone blocks shows that all the blocks have the same temperature, with the exception of three which are hotter.

Eldamaty said that these three blocks were "different in formation," and that a similar situation was also noted in the middle of the eastern side of the pyramid.

He also said that while inspecting the ground in front the eastern side of the pyramid, scientists found "that there is something like a small passage leading up to the pyramid ground, reaching an area with a different temperature. 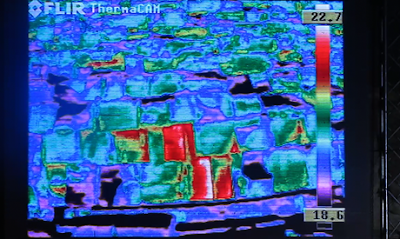 "What could it be behind it?" Eldamaty wondered.

He called on experts to offer suggestions.

"I don’t know yet what could lay behind such blocks or what these anomalies could be, but it will surely lead to major discoveries," Eldamaty told Ahram Online.

"I have several hypotheses in mind, though I cannot reveal them before conducting further research and study," he said, adding that Muon detection will soon be used on the Khufu Pyramid in order to determine what these blocks conceal and the nature of the anomalies.

"It could be void spaces, fissures or passages. So far, I do not know,” he said, adding that more should be revealed after two weeks.

An Egyptian Egyptologist, who spoke to Ahram Online on condition of anonymity, said that nothing would be found behind the blocks except for fractures, as this is the "mother rock" of the plateau.

He said that when the ancient Egyptians built the pyramids, they inserted the blocks and the casing of the two first rows of the pyramids on the area's mother rock.