WHY IS THE ANTINOUS TARANTULA BLUE?
MAYBE IT JUST WANTS TO BE BEAUTIFUL! 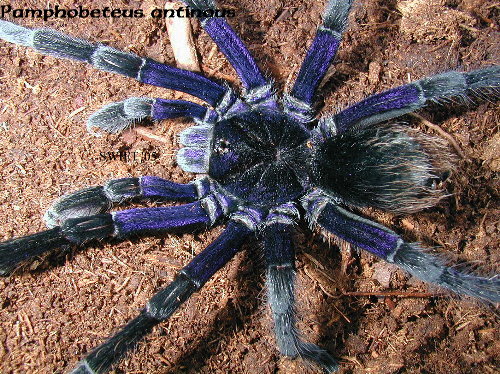 And many people are aware that there is also an ANTINOUS ASTEROID and even a few people have heard of the ANTINOUS CRATER.

But very few people have heard of the ANTINOUS SPIDER, a gigantic, bright blue tarantula ... as large as your face ... which devours birds in South America.

Now scientists have discovered the secrets of why blue tarantulas are blue ... and that discovery may help humans make better wide-angle digital displays.

A team of scientists reported this week in Science Advances that blue coloration appears in 40 species of tarantulas in the Antinous tarantula, among the most ancient of spiders.

Spider specialists don’t expect that the coloring wows females, because the eyes of tarantulas probably can’t tell blue from other colors. 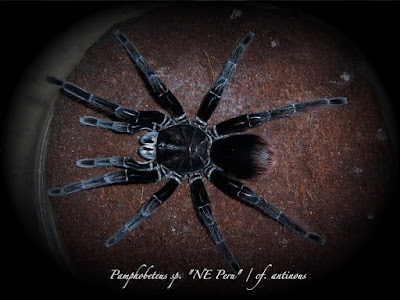 It's possible that tarantulas use this color to signal to prey or predators instead, but that's still a mystery.

Perhaps Antinous tarantulas are blue in order to make them irresistible … to the birds they devour!

The Pamphobeteus antinous is native to the rain forests of Peru, Brazil and Bolivia and is known for its ferocity and for its consumption of small birds and other hapless creatures asleep and defenseless when it prowls at night.

It runs and pounces very fast and surprises its prey unawares. It has no fear of humans and charges at people, hurling venomous hairs from its bristly legs and body.

It was named after Antinous because of its beautiful iridescent coloring and its breathtaking size. Its leg span is as big around as a man's hand with outstretched fingers. For arachnid collectors, the Antinous truly is the most spectacular spider, living up to its name.

The three ... the Flower, the Spider and the Star ... represent the three stages of initiation into the worship of Antinous which Antonyus has spelled out in the ECCLESIA ANTINOI Charter. 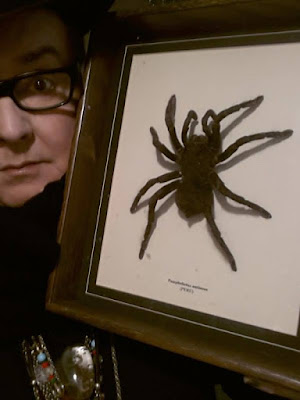 Priest Hernestus holds a "petite" female Antinous spider who is not as blue as the enormous males.

The Flowers of Antinous are the many people who join the group with an avid interest in Antinous and who draw artistic and intellectual inspiration from him, but who don't necessarily believe in his divinity.

That doesn't make them any less beautiful or precious, for without them, there is no religion of Antinous.

But there are deeper and far darker secrets for those who become ensnared in the web of the Spider of Antinous. They are those of you who have stated your heart-felt belief in Antinous the God and who have applied for citizenship in the Sacred City of Antinoopolis.

You have put yourself in his web. You believe in him and are awe-struck by him. And as you lie there in his web, perhaps unsure or even a bit fearful about what comes next, you look up and see your final destination shining darkly in the black nighttime sky.

You see the Star of Antinous which is your own ultimate self. Becoming one with Antinous ... HOMOTHEOSIS ... becoming aware of your true sacred nature.

There are many Flowers of Antinous, and of these, many, when they become aware of Antinous Consciousness, if I may use such a term to describe his touch, or the burning of his flame, are immediately ensnared in the confusion of the web of the Spider of Antinous. But few are they who have found the power of the Liberator, who restores the fragrance of the Flower and opens its petals to the unseen light of the Star.  I would say that those who have found their way back...return with new eyes...able to see the light that vanished from the sky...which is why I call the Holy Star of Antinous the Black Star.

So when we ponder this awesome blue spider ... "awesome" in the original sense of the word "scary" ... we think of the spiritual road upon which all of us have embarked.

On January 29th the Religion of Antinous celebrates the discovery in 131 AD of THE STAR OF ANTINOUS by Emperor Hadrian and his house stargazers.

That discovery marks the visible ascendance of the Beloved Boy into the celestial firmament ... for all of us on Earth to see ... whether we live in a big city or in a village in the Brazilian rain forest.