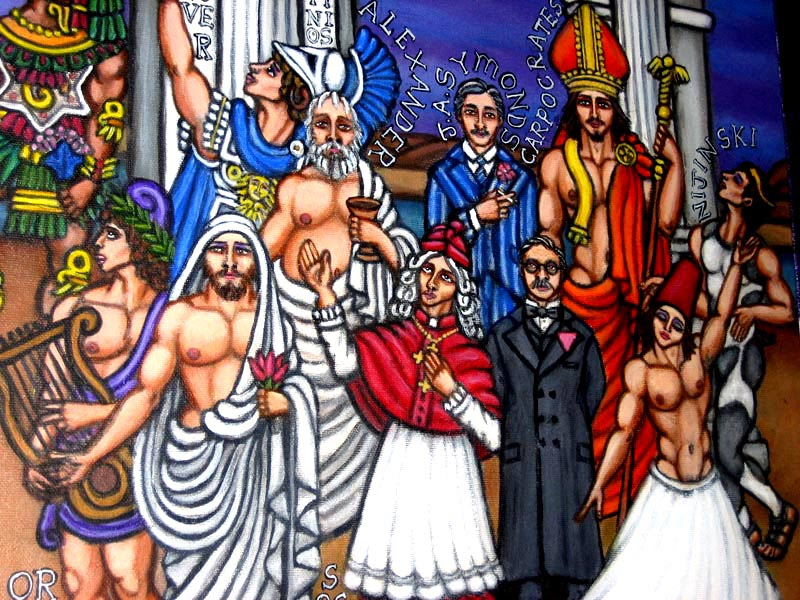 THESE are the sacred homosexuals whom we solemnly nominate for consecration to the Sainthood of Antinous,
May Antinous bless them and give them a place upon his Sacred Barque of Millions of Years,
And may they watch over us, inspire us, and bring us closer to the fulfillment of Homotheosis.


Joseph Christian Leyendecker – (March 23, 1874 – July 25, 1951) artist
http://chicagowhispers.com/wp-content/uploads/2012/06/J.C.-Leyendecker.jpg
Pre-eminent American illustrators of the early 20th century. He is best known for his poster, book and advertising illustrations, the trade character known as The Arrow Collar Man, and his numerous covers for The Saturday Evening Post.
http://www.oklahoma.net/~silvrdal/fxleyen.jpg

"KR's first homosexual experiences occurred in the Imperial Guards. The Grand Duke made great efforts to repress his feelings. But despite his love for his wife, KR could not resist the temptations offered to a person of his exalted state. KR claimed in his diary that between 1893 and 1899 he remained away from the practice of what he called his "main sin." Yet by the birth of his seventh child, KR had become a steady visitor to several of the male brothels of St. Petersburg. In 1904 he wrote in his diary that he "ordered my coachman...to go, and continued on foot past the bath-house. I intended to walk straight on... But without reaching the Pevchesky Bridge, I turned back and went in. And so I have surrendered again, without much struggle, to my depraved inclinations." The cycle of resistance and capitulation to temptation is a common theme of KR's diaries.[1]
By the end of 1904, KR became somewhat attached to an attractive young man by the name of Yatsko. "I sent for Yatsko and he came this morning. I easily persuaded him to be candid. It was strange for me to hear him describe the familiar characteristics: he has never felt drawn to a woman, and has been infatuated with men several times. I did not confess to him that I knew these feelings from my own personal experience. Yatsko and I talked for a long time. Before leaving he kissed my face and hands; I should not have allowed this, and should have pushed him away, however I was punished afterwards by vague feelings of shame and remorse. He told me that, ever since the first time we met, his soul has been filled with rapturous feelings towards me, which grow all the time. How this reminds me of my own youth." A few days later, KR and Yatsko met again, and a relationship developed between the two."
-----
Lozen – (c. 1840-1890) Apache Warrioress
http://api.ning.com/files/I2ujD9-wNpOajKWljjb6r6mu9cvacIEsuLPLDPqI9SoEbSMAOyBzKFhgLlKr*xE9HEFm9pTTmGniQxAXU8csc2wIAZzPLHyd/Lozen04.jpg
Lesbian Apache warrioress, sister of Victorio, Holy woman who fought with Geronimo, was with his final band of warriors when they surrendered.
"Lozen had no concern for her appearance and, even though she is seen in several famous photos of
Geronimo with his warriors, there is nothing to indicate that she is a
woman. You would never spot her. She was very manly in her appearance,
dressed like a man, lived and fought like a man. She never married, and
devoted her life to the service of her people, to the very end."
--------
Daniel Zamudio –(August 3, 1987- March 27, 2012) martyr
http://digitaljournal.com/img/6/8/7/0/1/4/i/1/1/0/o/Zamudio.jpg
25 year old boy killed by Chilean Neo-Nazis
------------
Manuel Acosta -( May 9, 1921-October 25, 1989) Painter from my neighborhood in El Pasohttp://elpasotimes.mycapture.com/mycapture/enlarge.asp?image=22824427&amp;event=715576&amp;CategoryID=34683
He is only known for having painted the iconic portrait of César Chávez for a 1969 Time magazine cover
He was brutally murdered by a 20 year old boy who was living with him,
who had been his model...and more.  The boy confessed:


"I was drunk and I couldn't stand it anymore," Najera said. "I just kept thinking of what he did to me and I just had to kill him. I'm not a homosexual. I have a wife and 2-year-old son."  Najera told authorities Acosta was standing in his studio watching television when he hit him once in the head with a hammer, and that he struck him three more times after Acosta went down. He said he then stabbed Acosta in the heart with a screwdriver to make sure he was dead.

He will be a very meaningful Saint of Antinous for me...because he opened whole new world of art when I was very young.  I always thought of art as something people did far away in Paris or somewhere.  In my neighborhood they painted the Virgin Mary and low-riders and Aztec warriors...but that wasn't art...right there next to the gang graffiti and a crudely drawn dick squirting sperm on some tits.  Art was something that people in Europe painted on canvases.  Manuel Acosta changed myperspective...because he lived about a quarter mile away
Right when he was murdered, they released prints of his work, and my mother bought the full set for me,
it was my first real introduction to art...my walls were covered with Manuel Acosta paintings,
I had no idea that it would mean so much to me later.  Hard to find any of his paintings oniline.

Self-portrait
http://www.elpasoartmuseum.org/_images/ManuelGregorioAcosta.jpg
"Manuel Acosta always used to wear a paper-bag hat. Father Arturo Banuelas, who led the prayers at Manuel’s funeral said then, "Today his paper hat is a crown of glory."  Some interesting facts about Acosta’s funeral that I read: He was buried with what he called his Mexican-Italian-Pajama shirt, wearing his trademark paper hat, with a can of Budweiser beer in his hand (his nephew placed it there)."
-------
Kenneth Weishuhn Jr. - (April 15, 2012)teen suicide
http://24.media.tumblr.com/tumblr_m3wlp7vJuJ1rss1h3o1_500.jpg
Beautiful Gay Suicide victim


---------
Chavela Vargas- (April 17, 1919 – August 5, 2012), singer
She drank heavily, carried a gun and wore a big red poncho...how can you not love a heroic lesbian such as this!
"I've never even been to bed with a man. Never. That's how pure I am; I have nothing to be ashamed of. My gods made me the way I am." - Chavela Vargas(she actually said gods!)
One of her famous songs, which was written by her friend and drinking partner, the prolific Mexican singer-song-writter Pedro Infante, could be the song that Antinous might have dedicatedto Hadrian on the last night of of his life, after they had had one of their fights, and Antinous had finally had enough of Hadrian's bullshit, and being an overly emotional teenager, decided that the only option was to throw himself into the Nile.