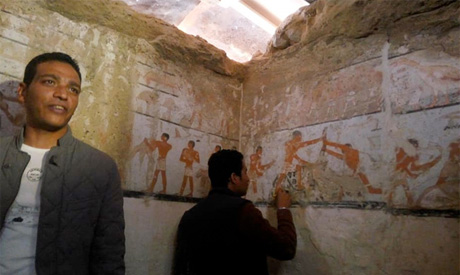 THE 4,300-year-old tomb of a 5th Dynasty Egyptian Priestess of Hathor named Hetpet has been found near the Khafra Pyramid on the Giza Plateau.

Hetpet was a priestess to the goddess of love, motherhood, music and fertility Hathor, who assisted women in childbirth.

In 2017, archaeologists at Antinoopolis in Upper Egypt found a temple CORNICE STONE which mentions Hathor and Antinous, along with Hadrian, Empress Sabina and Egypt's interest deity Hapi. 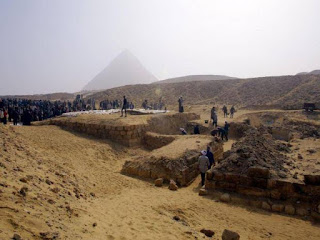 The tomb of Hathor Priestess Hetpet was found during excavations near the Great Pyramid of Giza, Egypt's antiquities ministry says.

This site, in Giza's western cemetery, housed officials from the Old Kingdom's Fifth Dynasty, some of which have already been dug up since 1842.

"We know of course that she was a high official and that she had a strong link with the royal palace," Egyptian Antiquities Minister Khaled al-Anani said, describing Hetpet on Saturday.

The tomb "has the architectural style and the decorative elements of the Fifth Dynasty, with an entrance leading to an 'L' shaped shrine," the ministry said.

The wall paintings inside were in "a very good conservation condition depicting Hetpet standing in different hunting and fishing scenes or... receiving offerings from her children".

Scenes of music and dancing performances, as well as monkeys featured as domestic animals were also depicted.

One wall painting shows a monkey dancing in front of an orchestra.

"Such scenes are rare... and have only been found previously in the (Old Kingdom) tomb of 'Ka-Iber' where a painting shows a monkey dancing in front of a guitarist not an orchestra," Mostafa Waziri of the Supreme Council of Antiquities, told AFP news agency.

Here is the tom and a couple of the stunning wall scenes: 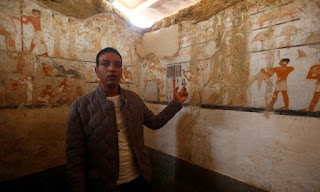 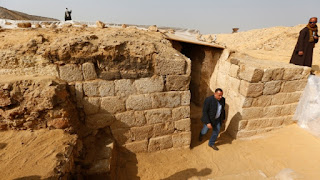 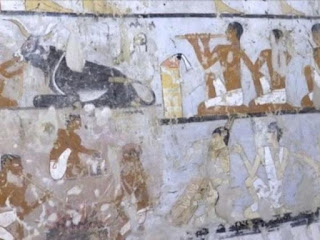 Posted by Hernestus at 8:20 PM