AS IN ANCIENT TIMES
AN ANTINOUS COIN MEDALLION BRINGS JOY 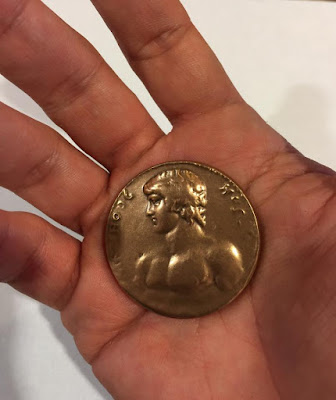 IN ancient times, coins minted with the image of Antinous were highly prized as amulets and talismans by worshipers.

ANTONIUS SUBIA shares these photos of a new/old coin which has brought similar joy to him.

"My new Antinous medallion just came in the mail and it was Way more fabulous than I expected.

"I thought it was just going to be a second copy of one I already had... which I considered to be my best and favorite.

"The price worked out to be the same for both after a bit of bartering on the new one. I was just expecting to have two of the same. 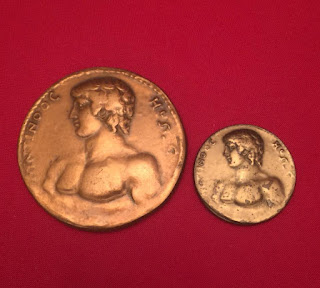 "But when it arrived I could tell from the weight of the envelope that this was going to be different. It turned out to be three times larger and so more magnificent! I love my new medallion!

"This is the most magnificent Antinous coin I have ever held in my hand...he has brought a new hope and power into my life. It is a sign of great and wonderful things to come! Antinous has arrived!"

Genuine coins and medallions of Antinous the Gay God cost thousands ... but there are lots of modern copies ... such as this bronze replica of an ancient coin/medallion minted in honor of Antinous.

It is "only a fake" of course. But that does not make it any less sacred or magical to anyone who loves Antinous.

In ancient times, Antinous coins/medallions were prized by his worshipers as a sort of portable Sacred Token or Pocket Shrine.

In his authoritative book about Antinous, "Beloved and God," Royston Lambert points out that in ancient times many followers of the Blessed Youth felt it was necessary to have a tangible representation of Antinous with them at all times for protection and for blessings: 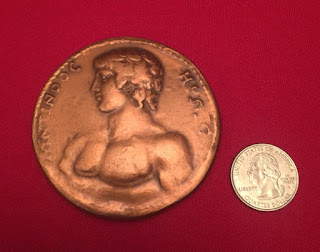 "Some of the devotees evidently could not bear to be parted from the beneficial and reassuring presence of their Antinous and therefore had small, light-weight travelling busts or bronzes made to accompany them on their journeys."

Poor people made do with more crudely made representations, such as coins and figurines and medals made of lead, clay and other base materials.

The demand was so great that there was a rife trade in which we would nowadays call "copyright piracy" among artisans turning out "illicitly yet more crude and cheap medallions of this hero whose images, miracles and protection were obviously sought by countless poor folk of faith."

People of modest means who were lucky enough to get their hands on one of his commemorative coins would carry it with them for protection, often even wearing them:

"Many were pierced by holes and hung from the neck as talismans: Antinous' image offering protection against evil, sickness and death," says Lambert.

Other such medallions were mounted in frames to adorn household altars, and others were buried with the dead "to invoke the god's aid on the perilous journey into the unknown."