A TURNING POINT OF CIVILIZATION
WHEN HADRIAN BANNED CIRCUMCISION 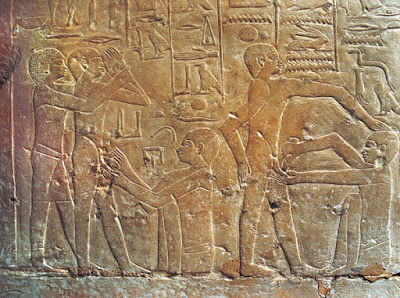 A turning point in Western Civilization was when Emperor Hadrian banned circumcision in a crackdown on radical Jews … in effect, banning Judaism.

As far as we know from the historical record, the land of the pharaohs pioneered circumcision … which is where the Hebrew slaves first encountered the practice and where they presumably adopted it.

The earliest reference to the procedure dates back to around 2400 BC. A bas-relief in the ancient tomb of the nobleman Ankhmahon at Saqqara depicts a series of medical scenes, including a flint-knife circumcision and a surgeon explaining, "The ointment is to make it painless," likely referring to some form of topical analeptic. 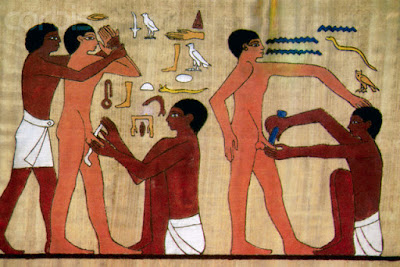 Ancient Egyptian circumcisions were not done in infancy, but instead marked the transition from boyhood to adulthood, just as they do in Islam.

The Greeks saw the Egyptian tradition as rather bizarre.

In the 5th Century BC, Herodotus made his opinion known in his work "The History of Herodotus."

"They practice circumcision for the sake of cleanliness," he wrote of the Egyptians, "considering it better to be cleanly than comely."

However, Egyptologists believe circumcision had a ritual meaning to promote virility instead of being a hygienic practice as traditionally has been thought.

The practitioner squatting on the floor on the left tells his assistant, who’s holding the patient’s arms: “Hold him firm, fast, don’t let him fall.”

On the right, instead, the patient says: “Rub it well, to make it efficacious,” and the physician answers: “I’ll make it painless, pleasant.”

These last sentences let us suppose that the object in the physician’s hands, on the right, had an anesthetic use. Perhaps it was a tube of ointment.

Others say it looks more like a knife or other tool for removing the foreskin.