ANTINOUS TAKES UP RESIDENCY
IN KAISER'S PALACE IN BERLIN 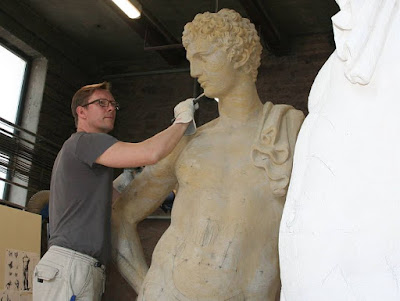 ANTINOUS has returned to the restored Imperial Palace of the German Kaisers ... as a replica facade statue.

In this photo, sculptor Wojciech Rostocki is putting the finishing touchess to a Baroque-style Antinous Statue which will adorn the facade.

The statue is made of reinforced plaster and is based on 3-D imagery of statues of Antinous.

The Berlin City Palace (Berliner Stadtschloss) was a royal and imperial palace in the center of Berlin, the historical capital of Prussia and subsequently Germany.

It was the winter residence of the kings of Prussia and the German emperors … the kaiser in German. 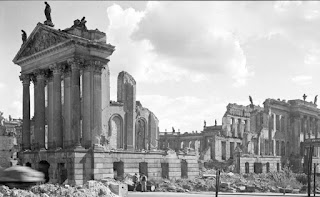 The palace was almost destroyed in Allied bombing raids in World War II.

The ruins were razed by the Communist regime in East Berlin after the war because the palace represented "imperialist capitalism."

In 2013 work started on reconstruction and a part of the exterior of the palace has been rebuilt. The completion is expected in 2019. The reconstructed palace will house the Humboldt Forum, a world centre for culture.

Posted by Hernestus at 9:03 AM