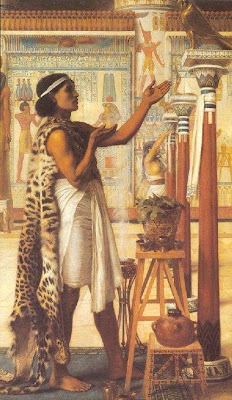 ANCIENT PRIESTS of Antinous at the Great Temple at ANTINOOPOLIS in Egypt were familiar with leopard-skin priestly robes.

Whether they actually wore leopard skins in the Egyptian priestly manner is unknown, but it is certainly possible.

The Ancient Egyptian magical SEM priests always wore a leopard skin ... as do many African shamans even today.

Indeed, it is highly likely that the Ancient Egyptians got the idea from their southern neighbors — where else could they have got the idea, after all?

The Egyptians were accustomed to lions and we know that lions were a menace even in the 2nd Century AD when Hadrian and Antinous conducted the SACRED LION HUNT. But it is safe to say that leopards were very rare and highly prized species even in Ancient times — which made them even more magical. 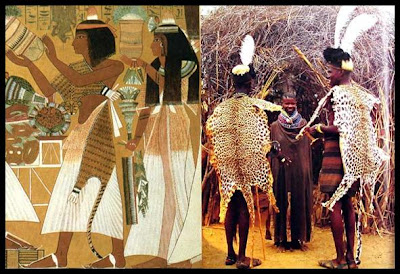 The Egyptians said the leopard started out as a variety of sacred lion, the lion being associated with the sun god Ra and of pharaoh's power and rulership as an incarnation of the sun god.

The leopard lived in the desert like the lion and was indistinguishable from the lion because the leopard originally had no spots.

This is the cue for Anubis and Seth to enter the scene!

At any rate, little Anubis was raised by the Osiris side of the divine family, not the Seth side. Anubis and Seth had a very strained relationship, to say the least, full of doubt and suspicion on both sides. 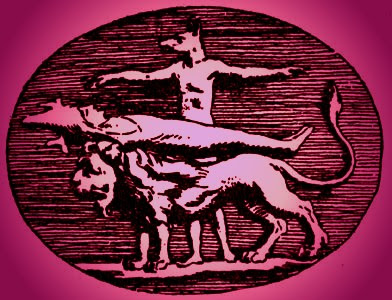 Not surprisingly, Anubis took sides with Isis (as his foster mother) and her son Horus (perhaps his biological half-brother? ) in seeking to avenge the death of Osiris (his own true father?) after Seth murdered Osiris by drowning and mutilating his body.


The Lie takes many deceptive forms,
always posing as the Truth.

But Anubis was able, by means of his keen canine senses, to sniff out Seth in whatever form he takes. 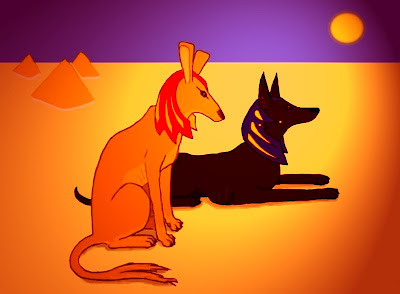 Once, Seth assumed the form of a leopard and blended into the desert sand so well that Horus was unable to spot him from the air as he circled high in the sky upon his falcon wings, using his sharp falcon eyes to scan the Earth.

But Anubis sniffed out Seth and decided to brand him so that everyone would be able to see him. Anubis trotted over to the banks of the Nile and dunked his paws in rich black Nile mud. Then he leapt onto the leopard and left indelible muddy paw prints all over Seth's hide.

That is how the leopard got its spots, according to the Ancient Egyptians.

The highest caste of Egyptian magician/priests wore leopard skins to symbolize the never-ending struggle between the Truth and the Lie. The Lie persists. Seth the Deceiver was not killed by Anubis. But Anubis revealed Seth for the Lie that he is.

And that is why the Priests at the Great Temple of Antinoopolis may have worn leopard skins — to demonstrate that it is possible to see through the Lie to uncover the Truth that lies underneath.