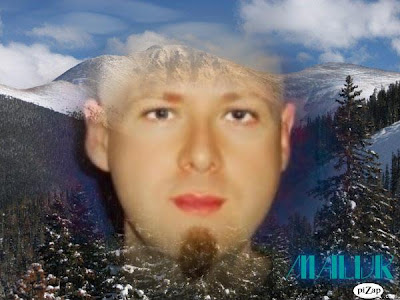 MALUK is dead. One of the most ardent and faithful modern-day worshipers of Antinous has died suddenly and quite unexpectedly.

Lord Maluk Xzivikus-Meek, who had an acute cardiac condition, lived long enough to fulfill his dream of moving away from Florida to a home in the mountains of Western Massachusetts in New England and finding the true love of his life.

Flamen Antonyus Subia and Priests Uendi and Hernestus, along with the many others who had known Maluk were stunned to learn of his death in the prime of life. He was an inspiration to all of us.


The terrible news that our beloved Maluk has died comes as a huge shock,
This is just right out of nowhere, I am extremely saddened to know that we are without our Maluk,
And with all my soul, I pray that Antinous will watch over him,
and give him a place upon the Barque of Millions of Years.
Maluk was the first Antinous worshiper I ever met way back in 2002.  He is also one of the few people devoted to Antinous who I had absolutely nothing to do with influencing his belief.  Yes, there are a great many Antinous believers who I have never met, and many who were introduced to Antinous worship by other people, but I can say with certainty that almost every person who worships Antinous, or has been exposed to Antinous as a legitimate god, has been influenced by my words either directly, or second hand hand...with the one exception of Maluk.  Maluk found Antinous all on his own and began worshipping Antinous with ferocious vigor just before he met me.  I first encountered him on a certain forum where he posted a message about gay spirituality ending his message with something about Praise Antinous!...I couldn't believe what I was reading, since I had searched for two long years for other Antinous believers and had found zero...I wrote to him straight away and we continued to remain in contact ever since, though always somewhat distantly.  In the early days of Ecclesia Antinoi, Maluk told me privately that he couldn't stand any of the people who had joined...I believed he said they were all fuckheads.  I loved Maluk for his quick analysis of the situation...it took me much longer to arrive at the same conclusion.  I was also glad to learn that recently, Maluk had established closer ties with one or two of our current members.
I will always regard Maluk as my brother and equal for having independantly discovered Antinous, and for passionately, completely and fully devoting himself to Antinous as his one and only god...Maluk and I had a great deal in common concerning our singular devotion to Antinous...we never once had a disagreement about anything...the one difference was that Maluk was never interested in becoming a priest, prefering instead to worship Antinous in a private capacity.  Maluk was totally out of his mind, but so am I.  Antinous chose two lunatics to be his frst worshippers, I was charmed to know that I had as my companion at the dawn of the New Religion of Antinous...a person as crazy and fanatic and passionately devoted to Antinous as I am.
It is therefore very sorrowful for me to learn now that Maluk is dead.  The early chapter of our religion is now closed...the pre-Religio Antinoi years are now known only to me.  My heart and soul go out to him, as he finds his way to the Barque of Millions of Years.
May Antinous bless Lord Maluk
Antonyus Subia
Flamen Antinoalis
Posted by Hernestus at 9:00 AM