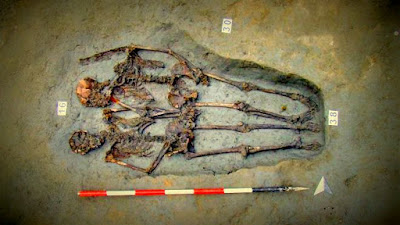 TWO ancient Roman skeletons, who mysteriously were buried holding hands, now have been identified as two males, researchers have revealed.

In 2009, archaeologists discovered the remains in the Italian city of Modena. The pair were dubbed the "Lovers of Modena" by the media, the assumption being that they were a heterosexual couple.

The researchers at that time could not determine the gender of the skeletons when they were found in Italy in 2009 because they were badly preserved.

But a new technique, using the protein on tooth enamel, revealed their sex.

The actual relationship between the skeletons from the 4-6th Century AD remains a mystery.

Some of the suggestions for the link between the two skeletons are that they are siblings, cousins or soldiers who died together in battle, study author Federico Lugli told Italy's Rai news site (in Italian).

Researchers suggest that their burial site could have been a war cemetery.
The researchers from Italy's University of Bologna said in Scientific Reports that the findings had profound implications for understanding funeral practices at that time in Italy.