ASTRONOMERS SHOW HOW HADRIAN
INCORPORATED THE COSMOS IN STONE 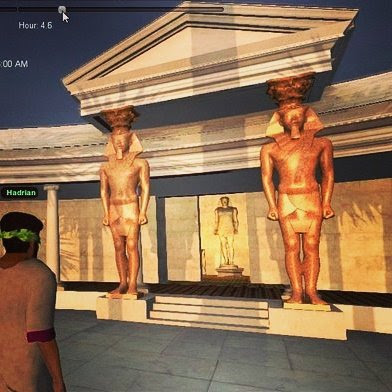 WE know that Emperor Hadrian was fascinated by architecture, astronomy and astrology and that he designed monuments to symbolically demonstrate how the Cosmos works.

Now New Zealand astronomers have helped re-create the skies above Rome for simulations showing how Hadrian built structures to align with the movements of the sun.

Waikato University researchers calculated the alignment of the sun and stars from thousands of years ago for the UNIVERSE PROJECT, for the History Channel. 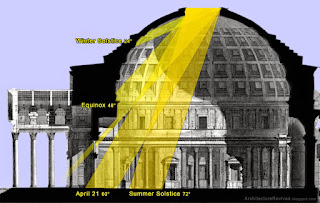 The university's dean of arts and social science, Robert Hannah, said he was astounded to see how US artists and designers used New Zealand's archaeo-astronomy to create 3-D animations.

He said animation used in video games was being adapted to show how modern-day ruins such as the Pantheon were used to track the sun.

"I've seen my son play games like 'Halo', so I knew what was possible but I'd never seen it adapted to ancient world buildings."

Ball State University's IDIA Lab drew on the astronomers' research to help it simulate the Pantheon, the ANTINOEION Temple of Antinous and the Meridian of Augustus, which centered on an obelisk used as a giant sundial and calendar.

This is their walk-through of Hadrian's Pantheon:

Posted by Hernestus at 9:35 AM