YOU soon may be able to text the hieroglyphic Egyptian spelling of the name of Antinous ... in genuine hieroglyphs!

Over 2,000 hieroglyphs may soon be available for use on phones, computers and other digital devices.

If approved, the available hieroglyphs will provide greater access and global uniformity for Egyptologists, covering a much longer period of hieroglyphic usage than ever before.

The proposal is part of a larger effort between the Unicode Consortium, ancient linguists, font designers, and the federal government to attempt to study, preserve, and then digitally represent ancient and endangered languages through the use of computer code.

Although Egyptian Hieroglyphs have been defined within Unicode since version 5.2, released in 2009, the glyphs were highly limited in number and did not stretch into the Greco-Roman period ... which was when Antinous lived.

There is only one other hieroglyphic inscription of his name ... in the glyphs on the atop the Pincio Hill in Rome.

Here is a transliteration of his name, which is spelled with these glyphs:

The Egyptians spelled it with a forearm ("A"), a wave of water ("N"), a hand ("D"), two reeds ("I") another "N", a water pot ("NU") and a bolt of folded cloth ("S"). The little triangles on either side of the "NU" pot are not standard glyphs and possibly only serve to balance the composition.

Though experts are unclear about this glyph, it is usually interpreted as meaning "eye make-up," "eyelashes," "looking" or "good-looking."

Incidentally, no royal cartouche is used in his name. Only the names of pharaohs and caesars are written inside a cartouche. The names of gods stand alone ... so Hadrian (a pharaoh) must be spelled with a cartouche, while Antinous (as a god) stands alone.

The name can also be spelled in a vertical format using another "S" glyph (the horizontal "door bolt"), depending on the scribe or artist's graphic art constraints. 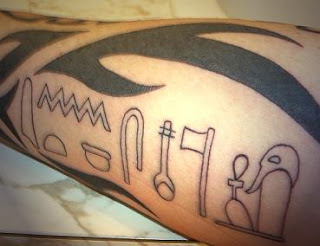 Aside from the mysterious, unvoiced eyelid glyph, the most distinctive part of the name is the "NU" which is a biliteral glyph, which means it is two sounds "N" and "U" combined in one glyph.

It's the only biliteral in the name. Biliterals always denote something special. The Egyptians usually didn't bother to try to show vowel sounds in names unless the vowel was particularly important.

That is an indication that this particular "NU" sound was very important in pronouncing the name Antinous. The Egyptians heard a distinct "NU" sound in his name and felt it needed to be graphically represented.

It is important to remember that this Egyptian spelling represents a phonetic rendering of the name Antinous. As we know from modern languages, other people hear other sounds in a name. It was the same in Ancient times.

Our transliteration from the ancient Greek is Antinoös, with an umlaut (two dots) over the second "o" to stress that there were four syllables (as far as certain Greeks were concerned).

In other languages, Antinous is spelled "Antinoo" or "Antinoos".

We know from other inscriptions that the Egyptians were quite accurate in rendering "A-D-R-I-A-N-S" (Hadrianus) and the names of the other Caesars.

So these glyphs give us a tantalizing clue as to how his name may actually have been pronounced.

Did they really call him something that would sound like "Andi-NU-us" to our modern-day ears? That's what the Egyptian hieroglyphic inscription implies.

Each glyph was carefully chosen by the Priests of Antinous. On the Earthly Level, they wanted a phonetic match, of course. But on the Sacred Level they wanted a mystical match.
As Above, So Below.

CLICK HERE for a more esoteric discussion of the mystical meaning of his name.