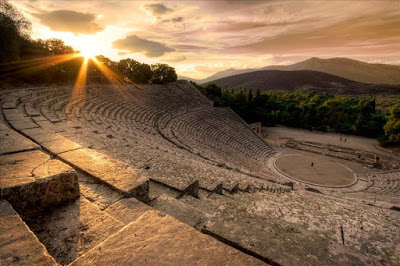 IN an unprecedented effort to rejuvenate interest in Greek cultural sites, 25 Ancient Greek theatres and archaeological sites across Greece are being reopened this week.

A number of theatres staged plays over the weekend and other sites will be opened to the public in coming days.

The “Athens Festival” institution, in collaboration with “Diazoma” association, have taken the initiative of opening the sites to the public in order to promote the country’s cultural heritage.

Most ancient Greek theaters are scheduled to open this weekend in order to host various theatrical productions during the summer.

As part of the initiative, the 25 ancient Greek theaters and archeological sites participating, will host a theatrical production of “The Woman of Zante” (“Gynaika tis Zakynthou”) by Dionysios Solomos, directed by Dimos Avdeliodis and Olia Lazaridou in the leading role.

Even though the organizers wanted the initiative to include 30 locations, the Central Archaeological Council of Greece (KAS) deemed that five of these locations could not be used due to renovations or excavations that were underway.

Because of the fragile nature of the sites, access will be limited.

For example, in the theater of Maronia only 350 people will be able to watch the play.

At other sites, such as the theater of Dimitradas, Athens Festival decided that the play would be performed outside the building, as an alternative solution.

Stavros Benos, president of Diazoma said that the implementation of the initiative is “’a great victory. Up until now, ancient theatres remained closed unless renovation work was carried out.”