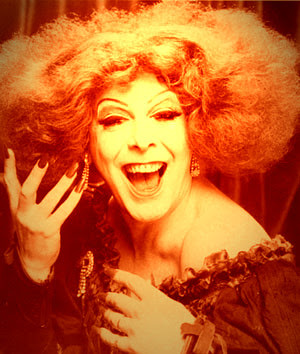 Our own Knight Stephanos personally knew Empress Regina Fong and conferred with her often in the legendary Black Cap gay bar in the heart of the West End Theatre District of London. And so it is fitting that Knight Stephanos (pictured right with Her Imperial Highness) explains her Sacred Significance to us: 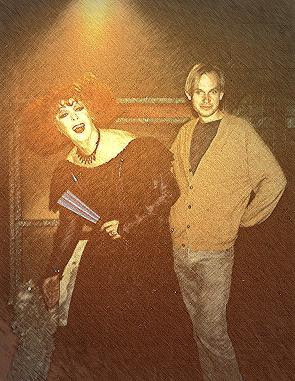 "Reg Bundy and his creative spirit, through HIH Regina Fong, reminded us all that we mattered as gay people, that we mattered, and that being just who we were was were our strength laid as a culture.

"I knew Regina Fong between the years of 1989 and 1995, a time when contracting the HIV Virus was a virtual death sentence. We witnessed scores of wonderful gay men fall to aids. Regina Fong (and more importantly his non-drag persona Reg Bundy) was a pillar of hope with his sarcastically witty way of keeping up stiff-British-upper-lips during some incredibly dark times.

"If Reg could keep up a brave face in such a scary time, then all was not lost. I had many conversations with Reg in the old front bar at the Black Cap. Surrounded by the dregs, gutter street characters and top-notch West End talent that would congregate, Reg held court and parlayed the latest gossip and told stories of how it was to be gay in London before it was legal.

"He was a Romantic at heart, a Dreamer and a Bitch, who always left you with something to think about, cry about or laugh about. There are many things that are a fog to me about London in those far-off days. But Reg Bundy I always remember as clear as a bell.

"I assumed Reg would live for ever. It is surreal to me that he is gone, But I know his spirit lives on, looking down from some corner of the Black Cap and many other pubs in London, and even right here in Hollywood, California, keeping watch and holding court, drinking vodka-and-tonic — being a beacon in dark times — and a Gay Saint Always."