VANDALS PILFER GANYMEDE STATUE
FROM A MUSEUM IN CARTHAGE 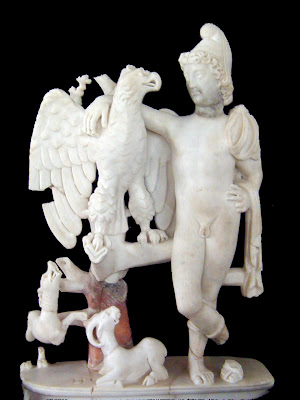 VANDALS have broken into the Paleo-Christian Museum in Carthage and stolen a 5th Century AD marble statue depicting the mythological figure of Ganymede embracing Zeus in the form of an eagle.

First discovered in pieces during a 1977 excavation in a cistern under the House of the Greek Charioteers in Carthage, the statue measured over a foot and a half (30 cm) once it was restored.

Study of the sculpture and others like it made clear that wealthy Christians of the period did not hesitate to decorate their homes with pagan sculptures.

The Tunisian police and Interpol are now on the lookout for the statue. 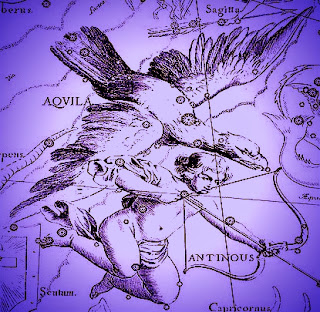 Throughout history, Antinous has been compared with Ganymede, with Hadrian as Jupiter/Zeus.

Ganymede was the local deity of Pergamum. So when Antinous and Hadrian arrived in the spring of 129 AD, Hadrian was worshipped as the new Zeus/Jupiter (an honor he did not refuse) ... and Antinous was adored as the new Ganymede.

After Antinous died, Hadrian looked into the heavens and saw a new star in the Constellation of Ganymede ... which he renamed the CONSTELLATION OF ANTINOUS.

Flamen Antonyus says: "The triumph of Antinous is the Ascension of Ganymede within the Cosmos of our own soul. There is a bit of Ganymede in each of us ... for we have been chosen ... we are GAY" ....