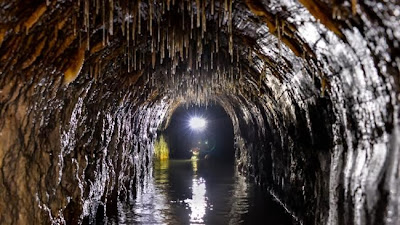 Thomas Ashby, a British topographer and archaeologist who explored the aqueducts before and after the First World War originally created the maps of the tunnels which the team is now working off of, according to The Telegraph.

The team is using 3D scanners mounted on tripods to produce images of the inside of the tunnels, and laser "rangefinders" to measure the size, direction, and elevation of the tunnels.

A six-wheeled "archeo-robot" is used to navigate along passageways which are too small or dangerous for the team members to enter.

"It's not very nice down there and there's often a build-up of gases, so robots are ideal," said Christopher Smith, the director of the British School at Rome, an archaeological research institute established in 1901.

"They're very good for getting into difficult underground areas. There are miles and miles of tunnels beneath sites like the Colosseum, for instance, much of which we know very little about."

The Aqua Claudio aqueduct, which is one of the tunnels being mapped by the team, began construction in 38 AD and ran for approximately 45-55 miles from the mountains beyond the modern towns of Tivoli and Frascati.

Aqueducts such as this one used gravity to provide water and can be seen from Germany to North Africa, or what once constituted the land occupied by the ancient Roman Empire.